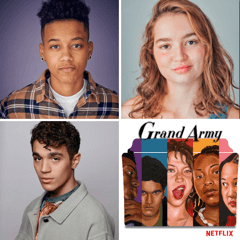 The timely series, Grand Army which premiered earlier this Fall to stellar reviews on Netflix, boasts an impressive ensemble cast which includes our very own David Iacono, Crystal Nelson and Lola Blackman.

Show’s Premise: Five students at the largest public high school in Brooklyn take on a chaotic world as they fight to succeed, survive, break free and seize the future. Season 2 is expected to be announced shortly.